The World Brahman Federation (WBF) Canada is a cultural, social, educational, charity and religious organization of Brahmans incorporated in Canada. The WBF Canada believes in the Brahmanical Vedic civilization and ‘Dharma’ aimed at promoting and enhancing the level of human consciousness for advancing the humankind. The WBF Canada disapproves socially constructed evils of Hindu caste system as these are inconsistent with the Vedic scriptures.

“If these characteristics be observable in a Shudra, and if they be not found in a Brahman, then such a Shudra is no Shudra, and such a Brahman is no Brahman.”

Greater than the greatest without end.

He or she who understands ‘that’

He or she conquers all worlds.”

The World Brahman Federation aims to introduce ‘Sanskar’ in the coming generations consistent with the cultural, social, religious, and intellectual traditions of Brahmans. The Brahmanical values continue to enlighten the mankind because of their universal nature. 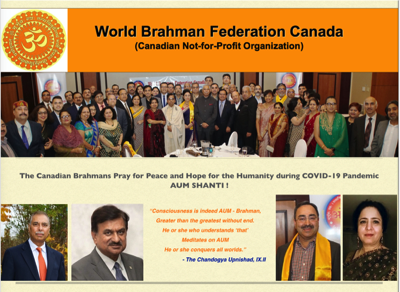